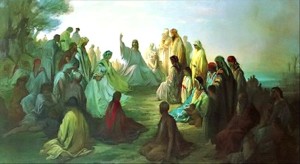 As with all Christians, I have faced our usual taste of skeptics a few days back as I was once again challenged by the very same argument of these very same people.  These skeptics would always challenge our faith by saying that Jesus Christ never claimed to be God. (Why would they do this for fun, I really don’t know)

The fascinating observation I have with such people is that they will always have this funny look on their faces once you throw them back the question: “Have you read the Bible?”  This ‘weird’ look would almost certainly give away their inner doubts as they attempt to gain back their composure and with pseudo-confidence say: “yes, I have.”

Well, I’m not here to write about arguing with people who talk against the truth; I just want to clarify what Jesus Christ really said in His word.  After all, we just follow The Word and nothing else.

Regarding the statement: “Jesus Christ was only a good man and a prophet because He never claimed to be God”; I can assure you that only people who has not read The Bible or who doesn’t know history will tell you this.

For those among you who were awake during your history class, I would like to pose you one insultingly obvious question: “why did the people want to kill Jesus then?”  This alone will lead to the end of the “Jesus never claimed to be God debate.”

“We are not stoning you for any good work,” they replied, “but for blasphemy, because you, a mere man, claim to be God.”

So, because Jesus was doing these things on the Sabbath, the Jewish leaders began to persecute him. In his defense Jesus said to them, “My Father is always at his work to this very day, and I too am working.” For this reason they tried all the more to kill him; not only was he breaking the Sabbath, but he was even calling God his own Father, making himself equal with God.

God made everything very simple.  Just read His words and believe them.  Below are verses containing direct quotes from The Lord Jesus Himself (yes, they are in red in some Bibles).  From these verses, I don’t think The Lord Jesus had any reservations in identifying Himself as God:

So for those among you whose faith are shaken by the voices of this world, take comfort in God’s words.  Jesus Christ is not just our Lord and Saviour.  He is who He claimed Himself to be: The Almighty GOD.

“I am the Alpha and the Omega,” says the Lord God, “who is, and who was, and who is to come, the Almighty.”