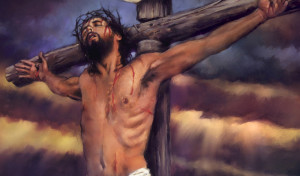 For a time now, I’ve been more interested in the Father and Son relationship of Jesus Christ and His Father.  With this, I was led to a well known line Jesus cried found in Matthew 27:46.

About three in the afternoon Jesus cried out in a loud voice, “Eli, Eli, lema sabachthani?” (which means “My God, my God, why have you forsaken me?”).

It’s a deceivingly simple verse which I’ve been hearing and reading about since I was in primary school.  But the Lord instructed me to read it again and again and again.  Little did I know that one verse can lead to several heavenly truths that will bless me; and I hope that it will bless you too.

The search began as I posed the questions: Why did The Lord Jesus cry out Matthew 27:46? Was Jesus really asking The Father why He was forsaken?  What is the significance of this verse?  Obviously it was for something else and that there are a lot of more things behind it.

Let me tell you right now, it is not to make the people feel guilty and it is absolutely not because Jesus was calling Elijah (Matthew 27:47).

Jesus cried Matthew 27:46 to let the world know that Psalm 22 has been fulfilled.

So what is so important about Psalm 22 that Jesus Himself quoted it?  Interestingly, Psalm 22 is written by David (almost a thousand years before Christ) and within it contains several messages.  So in crying out the first line (Psalm 22:1), Jesus is actually ‘activating’ the whole of psalm 22.  Looking within Psalm 22, I see 3 messages that are significant during the cross of Jesus Christ:

1. Groaning for The Father – Jesus showed the world that The Father forsook Him.

On the cross was the only time Jesus called His Father “My God” and this is to let the world know that The Father, for the very first time and for the only time in the whole of eternity, turned His back on His Son.  Jesus hung on the cross alone carrying the sins of every person on earth and calling to Him all of God’s judgment and punishment.

The world needs to know that there was a forsaking; that The Good Shepherd has now become The Lamb of God.  Jesus Christ went through this because He took our place on the cross (as we are the lost sheep).  Only by beholding on what The Christ went through will man see how forgiven we are.  In order for us to take Jesus’ place as God’s beloved son, Jesus has to take our place of punishment and rejection.

2. Prophecy of The Cross – Jesus prophesied the events during His 6 hour stay on the cross.

Psalm 22 provides us a clearer picture on what happened during Jesus’ time on the cross.  Amazingly, all these prophecies were fulfilled.  I guess when Jesus cried out Matthew 27:46, He’s also telling everyone: “Don’t you know what just happened?”

I do love Bible prophecies but this is not the focus of the article right now so I will just provide a quick rundown of how accurate each prophecy was fulfilled on the cross.

All they that see me laugh me to scorn: they shoot out the lip, they shake the head, saying,

He trusted on the LORD that he would deliver him: let him deliver him, seeing he delighted in him.

Those who passed by hurled insults at him, shaking their heads and saying, “You who are going to destroy the temple and build it in three days, save yourself! Come down from the cross, if you are the Son of God!” In the same way the chief priests, the teachers of the law and the elders mocked him.

My strength is dried up like a potsherd; and my tongue cleaveth to my jaws; and thou hast brought me into the dust of death.

…they pierced my hands and my feet.

I may tell all my bones: they look and stare upon me.

They part my garments among them, and cast lots upon my vesture.

When they had crucified him, they divided up his clothes by casting lots.

3. Worship and Praise to God – Jesus declared The Father as Righteous.

Jesus in His heartbroken and abandoned state knew perfectly well why He was up there on the cross.  He knew His role as The Lord and Saviour of God’s Kingdom.  Given this, He also knew Who His Father is.  With all His love and holiness, Jesus spent the last hour of His sufferings on the cross worshiping The Father.

With the activation of Psalm 22, we now can see what transpired between Jesus and God during His time on the cross.

Jesus Christ justified what The Father has done, Jesus Christ declared His Father as Righteous!