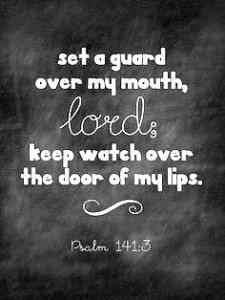 This is a continuation of the July 1st article: On Truthful Lips and Lying Tongues

Even so the tongue is a little member and boasts great things.

See how great a forest a little fire kindles! And the tongue is a fire, a world of iniquity. The tongue is so set among our members that it defiles the whole body, and sets on fire the course of nature; and it is set on fire by hell.

The tongue is a fire, no one can tame it. It takes the holy spirit to bridle it.  I tried checking out the Bible and here are some references on people who ‘misused’ their tongues.  I’ve left the Bible verses there so anyone can just check it out and read the whole story again. From here, one can see how God feels strongly about the misuse of our tongues that He, in order to spare us the trouble, either had to shut us up or change the words from our mouths.

Zechariah (Luke 5:18), the father of John the Baptist, was made to be mute because of his unbelieving words of God (from Gabriel).  This is to stop him from misusing his tongue further by blabbering more words of disbelief.

Elijah (1 Kings 19:4) was put to sleep because of what he was using his tongue for: praying for him to die.  Elijah was so stressed out of life that he begged God to kill him.  God, through his mercy ended Elijah’s mouth’s nonsense by making him rest, sleep, and by feeding him to restore his strength.

Balaam’s tongue (Numbers 23:11) was ‘possessed’ by the Holy Spirit, so he blessed instead of curse the people of Israel. Balaam was a professional ‘curser’ or should I use the word warlock who is hired by kings and the powerful to curse their enemies.  When Balak, king of Moab hired Balaam to curse God’s people, Balaam ended up pronouncing a blessing over them. I particularly loved Balaam’s response to Balak (his employer) when his employer complained to him: “Why have you blessed the people I hired you to curse?”

Balaam told his employer: “Must I not speak what the LORD puts in my mouth?”

On the previous article, it was already shared how champions of God’s Kingdom like Peter and John the Baptist used their tongues to glorify The Lord.  Here we focus on one person, a female who is not even supposed to be saved because she is not even part of God’s chosen people.  Here we see God’s love and grace that He saves even the enemy because of how they used their tongue.  I’m talking about no other than the story of Rehab.

Rehab was a prostitute from Jericho, an enemy of God’s people. When the time came for Israel’s spies to survey the land, Rehab helped the spies by hiding them in her home.  There’s a whole exciting story about this found in Joshua 2 and there you will see that the spies of Israel vowed to let Rehab and her family live once Israel conquers Jericho.

Throughout the story, what caught my attention was the faith of Rehab on God.  Having heard about what God has done for the Israelites, Rehab was certain that God has already given the land of Jericho to them.  Observe how Rehab regarded God:

And she (Rehab) said unto the men, I know that the LORD hath given you the land, and that your terror is fallen upon us, and that all the inhabitants of the land faint because of you.

Here we can see how Rehab used her tongue to express her belief in God; and this gained her salvation. It’s really amazing when the enemy of God shows more faith than the people of God themselves!

Adding ‘points’ to her faith scoreboard, what really sealed Rehab and her family’s salvation, which I believe really pleased God, was what she declared on verse 11 to the spies:

“For the LORD your God is God in heaven above and on the earth below.’

Her tongue spoke the truth and even though she was an enemy, The LORD God saved her because of how she used her tongue.  This holds true what the apostle Paul, through the Holy Spirit, said:

I don’t know with you guys, but after learning about this, I’ve decided to dig into the Bible and steal some verses that I can repeat again and again with my so-called tongue.  Like Rehab, I want to please God more and more by using my tongue the way it was intended to be used:  To speak God’s truth.

Here are some of my favorite verses for the week:

At the name of Jesus every knee should bow, in heaven and on earth and under the earth, and every tongue acknowledge that Jesus Christ is Lord, to the glory of God the Father.

You alone are God.

How about you? What do you say about God?