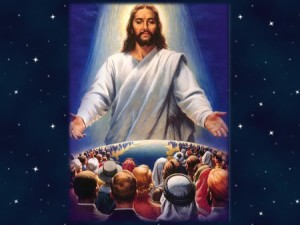 Do excuse the “geekiness” of this sharing as I just decided to have a break half-way through from marking some statistics exams.  I have always believed that God speaks to us through a language that we find most comfortable.  When speaking to Joshua, Israel’s general, God appeared as The Commander of The Lord’s Army with a sword drawn on His hand (Joshua 5:14).  When speaking with Adam, God went down as a man and walked with him in the garden.  When speaking to farmers, Jesus spoke the language of farmers; hence, we hear the words harvest, weeds and the mustard seed.  When speaking to Pharisees and tax collectors, The Lord would always use analogies on money (e.g. parable of the talents, people owing money to their masters, etc.)  When speaking to pastors, Jesus would always appear as The Shepherd.

Jesus when dealing with fishermen, showed how much He cares for them by giving them a boat-sinking load of fishes.

Today, for some strange reason (which I believe had a lot to do with what I’ve been reading in the weekend), God spoke to me as a statistician.  What fascinates me the most in the field of statistics is the concept of Central Tendencies.  Central Tendencies are simply numbers used to represent a whole data set in a fair and objective manner.  Let’s say for example that I have different levels of expenditures every week.  In a span of 5 weeks, I have recorded my expenditures as:

Now, how should I answer when a friend asks me: ‘how much do you spend every week?’  For someone who wants to be honest and accurate, I will come up with a SINGLE number that would represent all the recorded expenditures in a 5-week span.  Of all the numbers that I can choose to represent the 5 weeks of spending, I should come up with a number that would be fair in representing all the numbers.  This is where Central Tendencies come in.  In the case given above, I choose to use THE MEDIAN, which is the number located at the Physical Center of any data set.  In this case, I will reply my friend: “I spend about $105 every week.” I simply used the median:

The median (centroid) is the fairest number that can represent a data set.  It divides the data set into 2 equal halves; in this case, 2 weeks data on the left and 2 weeks data on the right.  If I use the lowest expenditure to answer my friend: “I spend $40 a week”, I would be close to lying because clearly, the number 40 cannot represent the weeks where I spent hundred dollars or more.

The Median being the physical center of a data set is a worthy representative/summary of the entire data set.

The good thing about The Median is that it can also measure the centroid not just of numeric/ratio data sets but it can also measure the physical center of ordinal data.  I guess by now you already know what I’m thinking.  Yes, I am here to 1.  Measure The Median of the Bible and 2. Extract the very words of God that He placed right smack at the Bible’s Physical Centre.  Now why would I do this?  It’s simply because like in the above exercise, The Median measures the single data that is worthy to represent all the data in a given set.  Meaning to say, the Median chapter (Central Chapter) of the Bible in statistical language would be a paramount chapter, which I believe was placed there by our Creator as a summary for all the chapters of His words for us.

Now for the drum roll…. The Median (Physical Center) of The Bible is:

Praise the Lord, all you nations.

Praise him, all you people of the earth.

For he loves us with unfailing love;

There you go ladies and gentlemen.  Psalm 117 is the computed Median of The Bible.  There are 594 chapters before it and 594 chapters after it making Psalm 117 the physical center of God’s word.  Still skeptical?  Well, no condemnation to you dear thinker.  God knows we will be and that’s why HE placed another indicator to mark the importance of this chapter.  What The LORD placed as the CENTER chapter, The LORD also made THE SHORTEST CHAPTER of the whole Bible.  I guess God knows how to make proper summaries right?

Now, for a serious statistician, this still won’t satisfy as a Central Tendency because we are still left with 5 lines here.  Another cunning idea comes to mind.  Now that we have the center chapter of the Bible right in our midst, what do you think will the center verse of the center chapter tell us?  Wouldn’t this be the ultimate verse that summarizes the whole Bible? (Statistically speaking)  Let’s get on with it shall we?

We have 5 lines in chapter 117; obviously the centroid (median) would be line #3.  The center verse of the central chapter of the Bible reads:

FOR HE LOVES US WITH UNFAILING LOVE.

Say this verse again and again and you would be reciting the Median, the Summary of God’s word. Isn’t God magnificent?  He speaks to fishermen, farmers, astronomers and statisticians alike.  It is true when Peter said that God is no respecter of persons (Acts 10:34).  Whoever you are, educated or uneducated, rich or poor, male or female; God has a word for you.  And among all the things God can say to you (He could have talked about hell and punishment for our sins), He will go down to your level to tell you that He loves us so much that He will lay down His life for you. This unfailing love can no longer fail because Christ has already succeeded that even when we were still drowning in our sins, HE ALREADY DIED FOR US! (Romans 5:8)  So, will God save mathematicians?

God bless you all.  Back to my exam marking…. With a huge grin on my face =D.