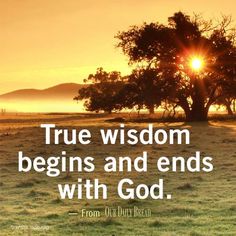 “If any of you lacks wisdom, he should ask God, who gives generously to all without finding fault, and it will be given to him.” –James 1:5

Most people think that wisdom comes with age, while others believe that wisdom can be obtained by reading philosophy and worldly books.  What’s worse is that some people think that they can buy wisdom buy getting their certificates through formal degrees and diplomas.  What can I say about all of these?  For one, I know a lot of people who have aged and who went through a lot of ‘experience’ in their life and still ended up as fools (unwise).  People in the second and third category, who went after wisdom through worldly means, became bigger fools for the very reason that they actually believe that they are already wise on their own merit.

These are people Paul wrote about whom, because of their perceived accomplishments and intelligence, claimed to be wise in their own right:

For although they knew God, they neither glorified him as God nor gave thanks to him, but their thinking became futile and their foolish hearts were darkened. Although they claimed to be wise, they became fools and exchanged the glory of the immortal God for images made to look like a mortal human being and birds and animals and reptiles.  -Romans 1:21-23

They may be a hundred years old with long white beard and 5 real PhD’s.  They may possess an I.Q. of 500 and make a million bucks a day BUT without seeing that all of these came from the life and death of Jesus Christ, they are lowered to be the blindest and dumbest people in the planet. Because only the fools say in their hearts: “There is no God.” –Psalm 14:1.

So how do we get real wisdom?  Well, let’s learn from the wisest man in the world shall we?  Did king Solomon read books? Did Solomon go to a good school to study the art of war? Did Solomon talked to sages and the most learned scribes in his time? No, he did no such things.

One thing I suspect Solomon did a lot when he was growing up as a prince was he did listen a lot to his wise father, David.  I can imagine, being the favorite son, Solomon would have breakfast with his father; and David would just talk about God and His Salvation again and again.  Before sleeping, David would pray and sing his psalms to The LORD and Solomon would be there listening.

These daily experiences made Solomon know God.  Solomon knew God to the point that when his father passed away, he had no one else to cry to but God.  Until finally, Solomon did the wisest act in his life which is recorded forever in God’s Scriptures: HE ASKED GOD FOR WISDOM (1 Kings 3:7-13).  Read through the verses and see that Solomon never claimed wisdom as his own.  He knew in his heart that everything comes from God.

God loves it when you ask Him for Wisdom; for He knows that Wisdom is a Person who will completely transform our lives for the better.  To say that everything we accomplished is from our own effort is to insult Him who died for our sins.  Wisdom is not something we earn or work for just the same as being covered with the blood of Jesus is.  The glory of Salvation, just like the glory of Wisdom, is for Him and Him alone.  Salvation comes not from our love or from our works but because of His love for us.  Ask for wisdom and see that our heavenly Father, through Jesus Christ, gives generously!

I’d rather be a stupid sheep enjoying my life with The Shepherd rather than a cunning wolf living a lie.