“Are You for us, or for our enemies?”  Joshua asked The Captain of God’s Army.  This is the question most commonly thrown at Christian Counsellors.  In this modern age where society attempts more than ever to get rid of God (or to paint Him in a bad light), this question becomes more relevant and more and more tempting to ask.

Jacob tearing his clothes in grief of hearing about his son’s death.

Charles was having a bad start in his day.  Even before getting out of bed, he was already entertaining fearful thoughts about how his commute to work will look like.  Crawling miserably through the peak hour at the train, he reached his work station and began his daily routine of forgetting his own self and redirecting his entire being on work.  Worn out and tired, his only hope was looking forward to his alone-time at home after the day’s grind.  Excitedly seeing his watch mark 6pm, out of nowhere, he receives a text message from his wife stating: “I will be off early tonight, let’s have dinner together”.  That single message sent Charles spiraling down with thoughts racing: “Why is everything against me?!” “Why can’t the world just leave me alone?”

These lines remind me of Jacob in The Old Testament who was going through a famine screaming: “all these things are against me!” (Genesis 42:36) Like both Charles and Jacob, many of the people today are screaming out the same sentiments:  Why? Why is the world so cruel and merciless?

These people spiral down to stress, worries, and depression because the world has successfully swayed their minds away from the truth: that GOD IS FOR US.

The world programmed us for survival.  As such, we were trained from young to be vigilant to life’s dangers – we therefore, tend to interpret things as negative rather than the opposite.  That it is better to expect and be prepared for harm than to expect good and constantly be disappointed by it.  Be aware of this negativity as we will seek to correct this form of thinking.

This so called living in anticipation of danger and harm is not the way of God.

For I know the thoughts that I think toward you, saith the Lord,
thoughts of peace, and not of evil, to give you an expected end.
Jeremiah 29:11

God has made sure that His love for us in NOT forgotten, watered-down, or misinterpreted.  Hundreds of verses and references (even direct declarations) are there to ingrain in us this truth that God is here to love us and definitely NOT to harm us or even punish us.  Simply put, that God is for us (Romans 8:31).

The Lord Jesus Christ reprimanded the apostles saying “Oh you of little faith!” The Apostles seem to be stuck in their earthly perspectives that even with The Lord Jesus in the midst, they still cannot escape the pull of negativity.  Jesus Christ asked them (interpretation and rephrasing are mine):

When I was talking about yeast, why do you think I was speaking of hunger?

When the storm was raging, why did you think the boat I AM in will capsize?

Today, Jesus is posing us this same question:

When the sick approached Me, what did I do?

When the people were hungry, what did I do?

When sinners approached Me, how did I treat them?

How can you still not understand?  Why do you think ill of Me?

When you see Me on the cross, why do you still think that I am angry at you?
If I am no longer angry at you, then why do you expect bad things to happen to you?

Oh you of little faith!!

We keep on expecting negative things because we project our human and fleshly perspective unto God.  We know how much we have sinned and we, therefore, expect God to send us punishment; forgetting the extent to how good He is and how much He has forgiven us. 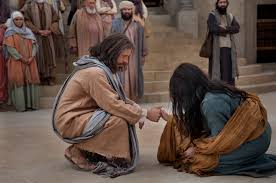 (Jesus and the woman who was caught in adultery)
For, behold, I AM FOR YOU,
Ezekiel 36:9

The truth of the matter is that, God is out there FOR His children (Romans 8:28).  No matter how true this is, we have yet to believe this in order to see His blessings and to receive them.  Going back to Charles, what he failed to see was that his company values him that’s why he is over-utilized.  He doesn’t have to fear unemployment and he doesn’t have to fear fading away to irrelevance.  The morning rush hour commute in Singapore is honestly stressful.  Yet, we fail to see that Charles lives in a country where he can travel safely and conveniently anywhere for less than $2!  At the end of the day, he has a wife who wants to be with him; a wife who always sought his company.  This man has a wife who loves him and because of his lack of perspective, he does not see it!!  How can people thinking like this draw from The Lord? That whichever blessing God throws his way, he sees it as a stressor?

Jacob, on the other hand, complained and lamented, forgetting that he was ISRAEL.  He failed to see in God’s perspective that everything was for him: That the ruler of the land was calling out to see Benjamin (Jacob’s favourite son) because this ruler is his son Joseph and Joseph wants to bless them all!  Jacob waxed and waned because he thought the world wanted to take away his 2 sons.

What Jacob forgot was how good God is until the obvious came and he saw his favourite son alive and is actually the said ruler of the country who was sent by The Lord to save him and his people from famine.

It is all about whether we focus on our human perspective or in God’s truth found in The Bible.  Look through your current life and see, like the Charles and the Jacob’s of the world, that truly, GOD IS FOR YOU.  We see it in our very person, we see it in our family, we see it in our society and friends; we see it on the cross.  God’s blessings are everywhere and it is up to you to see it.