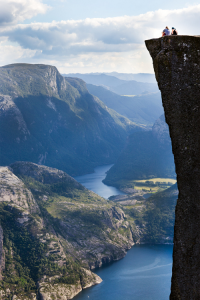 Isaiah 48:17 “This is what the LORD says” your Redeemer, the Holy One of Israel: “I am the LORD your God, who teaches you what is best for you, who directs you in the way you should go.”

Who can know us better than our Creator?  Who can love us more than our Redeemer?  The LORD sets His instructions clearly but people choose to go their own way, they think they know what is best for them.  They go their own way blaspheming, ridiculing and rejecting The Holy One of God; and when everything fails, they blame it on ‘the acts of God.’  When we ignore the loving voice of our Creator and we begin placing our trust on the fallen world, what do you think is going to happen?

As we read the word of God, we see that there is absolutely no reason to doubt Jesus Christ – our Lord and Redeemer.  Everyone who came to Him was simply blessed.  Everyone who served Him was paid in full.  Blessed is He who had the revelation of God that: “He would never allow the righteous to fall” (Psalm 55:22).  No one who listened to The Lord ended up abandoned and no one who served Christ ended up the same way as they were before.  Shepherds became kings, corrupt tax collectors became ‘blesser’ of people, prostitutes became evangelists, murderers became champions and the dead became alive.

Paul, the persecutor of Christians, through Jesus Christ, became one of the greater apostles of God’s Kingdom.

These are the effects of believing and trusting in the One who has died for you – Jesus Christ.  He has nothing but great plans and good things waiting for you.  He is the God who blesses, He is the God who cares and He is the God who loves.  No way in creation will we touch The Lord Jesus and end up worse than we were before.  We are His sheep and He will instruct us and teach us in the way we should go; He will counsel us and watch over us (Psalm 32:8).  Stay in peace! Jesus Christ NEVER fails!

Jesus Christ has great plans for you and for me, whatever it is; He found it worthy to seal this promise with His blood on the cross.