Now early in the morning He came again into the temple, and all the people came to Him; and He sat down and taught them. Then the scribes and Pharisees brought to Him a woman caught in adultery. And when they had set her in the midst, they said to Him, “Teacher, this woman was caught in adultery, in the very act. Now Moses, in the law, commanded us that such should be stoned. But what do you say?”

This they said, testing Him, that they might have something of which to accuse Him. But Jesus stooped down and wrote on the ground with His finger, as though He did not hear.

So when they continued asking Him, He raised Himself up and said to them, “He who is without sin among you, let him throw a stone at her first.” And again He stooped down and wrote on the ground. Then those who heard it, being convicted by their conscience, went out one by one, beginning with the oldest even to the last. And Jesus was left alone, and the woman standing in the midst. When Jesus had raised Himself up and saw no one but the woman, He said to her, “Woman where are those accusers of yours? Has no one condemned you?”

And Jesus said to her, “Neither do I condemn you; go and sin no more.”

Depending on the angle from which a movie portrays a particular character in a story, an audience can be influenced to take sides with the less fortunate, hard-done-by character and take sides against the ‘evil’ doer, fairly easily.  We crave justice in movies we watch, in our own lives and for those we love – we want any offended to be paid back whatever the offending person owes them. To want such justice is a natural human response, as offenses must be paid for.

In Isaiah 55, God declares that His thoughts are thoughts of grace, unlike ours which are often thoughts of condemnation towards ourselves or someone who has offended us.

In the story in John 8 above, this difference in God’s thinking versus man’s thinking is beautifully demonstrated.  The scribes and Pharisees, who were apparent teachers of God’s law, had thoughts of condemnation. They wanted to see justice done for the law that the woman had broken, taking sides against her, wanting to see her pay by death. To see that happen would have satisfied their sense of self-righteousness. 1

If God is for us, who can be against us?

Jesus, on the other hand, being the perfect, sinless Man; could have picked up a stone and taken sides against the woman – but He did not.2 He was for her and His thoughts were thoughts of grace towards her. He upheld the justice the law demanded by in essence saying, ‘Yes the law says she must be stoned’, by giving the scribes and Pharisees the option to stone her; and was also able to uphold love by separating her offense from her in allowing Himself to be condemned for her offenses later at the Cross. 3

God wants us to know Him evidenced by Him giving us the Bible to get to know His heart. And His heart, revealed through His Son, Jesus Christ is a heart that does not condemn the sinner.4

We all have trouble separating offenses from ourselves and from an offender but most gratefully, God does not. God is for us whether we are the offended or the offender. And because of what Jesus has done for us at the Cross, He is never against us no matter the circumstance.5 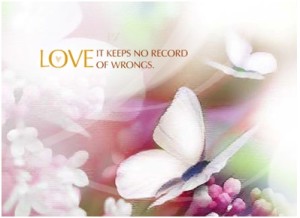 These verses can make us realise how far short we fall from being truly loving, but God’s desire is not for us to dwell on our inability to love, but to realise that this is actually how He loves us.6 Whenever the sense of being truly loved by another person has been lost or our sense of justice has been violated, the Cross will bring satisfaction to both of these needs of the heart. His love is always on our side today because justice has been perfectly satisfied through Jesus paying for all wrongs and offenses on the Cross. Today, God is not keeping track of any of our wrongs – He is love.7

…and in His love He will be silent and make no mention [of past sins, or even recall them]; He will rejoice over you with singing.8